While we love all the recent health-conscious options that the Egyptian eatery scene has offered us over the years, sometimes we just want to forsake our organic Zooba fool sandwich for good old full-cream Macarona Bel Bachamel. 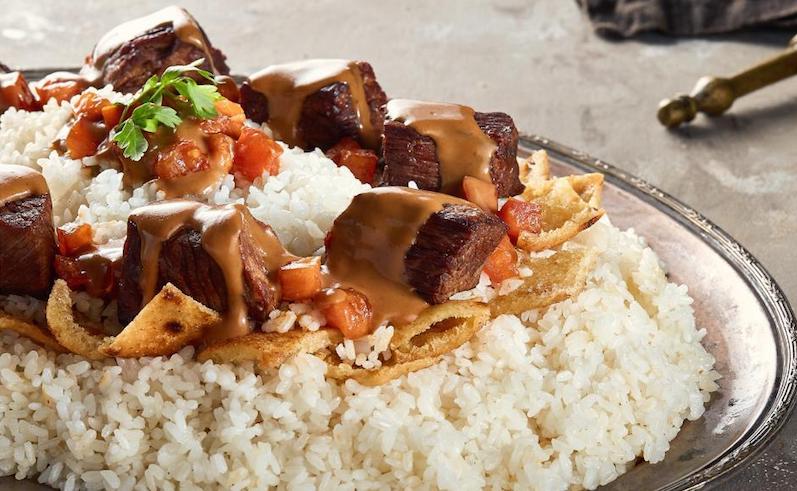 With the global health wave having taken over in the past few years, Egypt is one of the many MENA region countries that has worked towards following the fitness trend. In doing so, we’ve stuffed hammam with quinoa and replaced ta3meya with organic home-grown meat that is only fed biologically vegan grass. But every now and again, we’d rather switch our mantra-reciting cow and extra extra virgin oil for some good old samna and carnivorous cows. Enter authentic Egyptian dishes, the likes of full cream yogurt encrusted fattah and samna-infused molokheya; the traditional way of doing things. So we decided to speak to the experts in the field of good old Egyptian comfort food, to uncover the truth behind the pillars of Egyptian cuisine. Executive chef Hani Mohammed Ibrahim of the Concorde's Abou Auof restaurant - specialists in the Egyptian culinary discipline - sheds light on the staples of our countries bread and molokheya.

Together with the professional chef Hani Mohammed Ibrahim of Abou Auof Cafe, we've rounded up the 6 Egyptian dishes you just can't mess with.

Macarona bel bachamel - a beacon of hope and celebration in every Egyptian home - is one that contains its key secret in the richness of the Bachamel sauce itself. Fancy versions of milk - such as the infamous almond nut, the coconut and the hazelnut - are not welcome here. Where's our evidence you ask? Well Chef Hani - who's been in the cooking industry for the past 21 years - emphasizes that Egyptian dishes are all about the technique and the uniqueness of the ingredients.

"Egyptian dishes done right need to be cooked with the proper technique, the way your mama used to make them that is. Otherwise, the dish doesn't end up tasting as good as it's meant to. It's just won’t be what we're used to," explains the passionate Egyptian chef. And, we're inclined to believe him. What is the macarona without the bachamel? Basically penne with organic vegan cheese. Pass!

Fattah is one of those foods that try as we may, we can never resist. The allure of all those carbs mashed up into one voluptuous medley of salty delight is what Ramadans are all about; diets be damned. This pillar of Egyptian cuisine is actually one of Chef Hani's specialities. Having joined the Abou Auof team after working in the Gulf and Sharm El Sheikh for years, Chef Hani tells us why this dish is done right in Egypt and only Egypt.

"I prefer the Egyptian way for sure. When I eat or make Egyptian dishes abroad, it doesn't come out the same because the meat is of a different quality. In the UAE, they use Australian meat. Here, we use baladi meat and it’s what makes the world of difference.”

A staple of Egyptian cuisine, 7amam ma7shy is pigeon stuffed with rice or freek. And while that’s probably why we got so round along the waist this Ramadan, it just wouldn’t be the same had it been stuffed with organically-fed quinoa. The North African meal - which used to be a delicacy in Ancient times - is one of the many dishes that Chef Hani had started dabbling in from a young age.

"I started cooking when I was 9 years old. I didn’t have any sisters at that point so I'd help my mum cook for the family. I ended up falling in love with cooking though," says the food connoisseur of his cooking beginnings. "there’s something peaceful about being in the kitchen and cooking molokheya and fattah with your family."

The green leafy vegetable actually has several health benefits including the improvement of digestion and the reduction of blood pressure. But even if it didn’t have all these wonderful advantages, Egyptians wouldn’t give up molokheya for all the riches in the world. And diners at Abou Auof agree with the leafy dish being a favourite, among other dishes.

"While molokheya actually came from the Ottoman Empire, Egyptians have adopted it as one of their own. It is very healthy but it can’t be done any other way than with samna; If you want that kick. And garlic of course! The Egyptian Molokheya can be cooked in two ways, either in a soup or a little thicker with bread which we make fresh and from scratch here,” emphasize Concorde's Molokheya expert. "This is different than how it's done in Syria and Lebanon. Theirs is less liquid and is done more in the vegetable's solid form."

While we won't be indulging in molokheya on our date nights, we definitely know where to find it the remaining 365 days of the year when we've been too busy to date.

Ma7shy which was brought over by the Turks, also has the advantage of resembling the average 40 - year old Egyptian man. Ma7shy, much like the previously Pharaonic-pigeoned delicacy, cannot be stuffed with organically fed quinoa. Done with good old greasy rice, this is the meal that was used for many an Egyptian pre-schooler as a technique of force-feeding them their required greens. Chef Hani - who loves fool Iskandarani - has worked alongside Italian and German chefs. However, he loves the full oriental vibe, dishes and experience of Abou Auof; the restaurant immerses its patrons in a layali zaman ambiance with the scent of ma7shy subtly lingering in the background. Chef Hani is adamant on every culture having its own way of doing things, ma7shy included.

"The Egyptian techniques of cooking dishes is obviously different from other cultures. I don't expect all cultures to perfect the Egyptian one. But Egyptians do their own traditional dishes best just like Syrians do theirs best. Abroad though, Egyptian cuisine isn't as widespread as other Middle Easter cuisines. It's mainly Indian, Moroccan among others that are most known."

Bamia is actually quite low in calories, not when it's done the Egyptian way though. However, having grown up eating it, we can't imagine it being done any other way.

"The secret is in the meat and we get the freshest ingredients here," says chef Hani. "Besides, I think a big part of what makes our dishes good here is that they're cooked with love and we're a team that work well together and care about each other and that comes out in the food, whether we're making bamia or molokheya."

You'll need to excuse us while we go make a few very important lunch decisions.